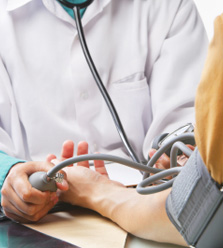 Diabetes has reached epidemic proportions in America, and is frequently accompanied by both hypertension and vascular disease. All three are major contributors to heart disease and stroke – the number one and three causes of death in the U.S. – and African-Americans, Hispanics and South Asians are especially prone to developing both the diseases and dangerous complications, including loss of limbs, vision and mobility.

That’s why NuHealth created the Zaki Hossain Center for Hypertension, Diabetes & Vascular Disease at Nassau University Medical Center – to help our patients prevent, diagnose, monitor and treat these diseases as interrelated parts of a complex medical puzzle. The Center is housed on a beautifully renovated floor, specifically designed to encourage collaborative care of diabetes and related diseases.

Why do I need to manage it?
A variety of serious health conditions are linked to hypertension, including atherosclerosis (hardening of the arteries), heart disease, kidney disease, stroke and diseases of the eye. To avoid these complications, patients must take steps to manage their blood pressure with lifestyle and diet adjustments and, in certain cases, with medication.

Do I have hypertension?
Hypertension is often called “the silent killer” because people who have it don’t tend to feel anything unusual. It is, however, found most frequently in people who smoke, who are obese, and who are not getting enough exercise. Hypertension is also more common among African-Americans, and is somewhat more common among men than women. It is found more frequently among people who suffer from diabetes and/or vascular disease. If you are in any of these risk groups, or have a family history of hypertension, you should be screened for it by a medical professional.

What is Diabetes?
Diabetes is a disease that impairs the body’s ability to process sugar, fat and protein in food. Affecting millions of Americans, diabetes is the fifth leading cause of death and the leading cause of disability worldwide. Moreover, diabetes is on the rise because it is often brought on by today’s diets, which are often high in sugars, starches and fat, as well as a lack of physical activity.

Do I have diabetes?
You may feel fine and have diabetes. The only sure way to know is to have a screening blood test that shows how well your body processes blood sugar. Routine blood tests performed by your doctor may not reveal the presence of a diabetic conditions. Some signs of diabetes may include unusual thirst, frequent urination and, in some instances, unexplained weight loss. People with a family history of diabetes, who are obese, or who are not physically active should be screened for diabetes. African-Americans, Hispanics and South Asians also have a higher risk of developing diabetes.

What should I do if I have diabetes?
Untreated diabetes can contribute to a variety of serious health complications, including diseases of the heart, kidneys, eyes, nerves and vascular system, that literally threaten both life and limb. A coordinated approach to disease management is required to help control diabetes, prevent complications and protect your overall wellness.

What is Vascular Disease?
Vascular diseases are disorders of the blood vessels, many of which are known as ?hardening of the arteries.? While this problem is usually associated with heart disease, such disorders can also affect other parts of the body, and cause a variety of serious conditions, including:

Abdominal Aortic Aneurysms (AAA) – These dangerous malformations in the wall of your body’s largest artery are among the most common causes of death in people over 60.

Stroke – If the carotid artery, which supplies a significant portion of the blood supply to the brain, becomes blocked by plaque, the brain becomes starved of blood and oxygen, which can cause permanent damage.

Blocked Arteries – When the flow of blood through arteries in the abdomen, pelvis and legs is restricted, it can cause sores, prevent the healing of wounds, and cause tissue death leading to the loss of limbs and extremities, as well as loss of function in critical organ systems.

How can vascular disease be treated?
If you have diabetes, you have a much higher risk of having vascular disease that, if untreated, can result in limb loss, stroke and other complications … even death. Minimally invasive interventions and surgical procedures can be performed to remove or bypass vascular blockages and treat other disorders. The vascular team at Nassau University Medical Center also treats aortic and other aneurysms, and provides diabetic foot care and state-of-the-art treatment of varicose veins.