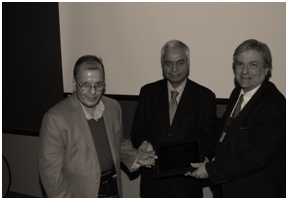 On November 12 and 13, 2013, the Von Tauber Institute for Global Psychiatry, a research arm of NuHealth’s Department of Psychiatry and Behavioral Sciences, honored Professor Dinesh Bhugra with the Second Annual Von Tauber Award for Global Psychiatry, in recognition of his outstanding service and accomplishments in world psychiatry. At the ceremony in the NUMC Amphitheater, NUMC Psychiatry Chair and Von Tauber Institute Director Nyapati Rao, MD, MS, praised the recipient for his extraordinary accomplishments in the field, which include presidency of the UK Royal College of Psychiatry, and upcoming presidency of the World Psychiatric Association.