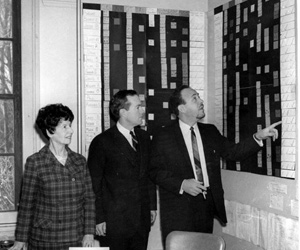 In 1945, Olga Von Tauber came to the United States from Vienna at the age of 38, and became a naturalized citizen in 1951. In the U.S., she started her career as a resident doctor in psychiatry at St. Joseph’s Hospital in the Bronx, NY, where she worked from 1946 to 1947. Later, she obtained board certification in psychiatry from the American Board of Psychiatry and Neurology (ABPN). For a brief period (1944-45), she served as a visiting professor to the University of Haiti at Port-au-Prince, Haiti. Beginning in the early 1950s, Dr. Von Tauber had served in Kings Park State Hospital in various positions, initially as a supervising psychiatrist, then as an associate director, and finally as the first woman director, in 1968. As the first woman director of a state hospital in New York, Dr. Olga von Tauber was a pioneer for progressive values in psychiatry.

In 1986, the National Faculty Directory reported that Von Tauber was a faculty member in the Department of Clinical Psychiatry at SUNY Health Science Center at Stony Brook, NY. After a long and luminous career and life, Dr. Von Tauber died at the age of 95.

Dr. Von Tauber’s philanthropic activities were many. Huntington Hospital, which is part of the North Shore-LIJ Health System, received a donation from the estate of Robert Von Tauber and Olga Von Tauber in 2004. In 2010, Nassau Health Care Foundation (NHCF) reported receiving a bequest of $188,665 from the Von Tauber Revocable Trust, to enhance the department of psychiatry at the Nassau University Medical Center (NUMC). This bequest is an initial partial distribution of the total pledge of approximately $350,000 being made to NuHealth to be used solely and exclusively to improve the Department of Psychiatry programs. With such a generous gift, the department launched The Von Tauber Institute for the Study of Global Psychiatry to realize the vision behind the Von Taubers’ bequest by studying the phenomenon of globalization and its various manifestations, with the goal of delivering sensitive and culturally competent care to Long Island’s multiethnic patient population.